"Releasing an album made up of just two songs could be seen as a very brave, or stupid thing to do nowadays..."

Thus spake the opening line to the press release for 'CrowSoul' by Half Deaf Clatch.

CrowSoul comprises two songs: Emissary, and The Reaping, each of which run for over twenty minutes.

Emissary is the first song, and opens the album with a delicate guitar instrumental that offers a Mississippi Delta Blues-esque thumb-picked bass line, coupled with delicate finger-picking and soaring slide guitar notes, married with a Spanish Flamenco feel and delivered at the tempo of a theme to a Spaghetti Western movie.

Trying to provide a written description of this unique music doesn't do justice to the sublime result of this apparent fusion of styles. This listener was hooked from the first note, and carried along for two blissful minutes.

And then, just when you think it can't get any better than this, Clatch begins to sing.

His voice is a force of nature. Blind Willie Johnson meets Charley Patton, opening the narrative of a biblical, apocalyptic tale of The CrowSoul arriving on earth to claim the souls of the sinful, the greedy, and the just plain bad.

The Reaping opens with the tolling of a bell behind a sombre slide guitar intro, the tone of which hints at the darkness of what is to come.

Clatch's superior musicianship and growling delivery is a match made in...well, maybe not heaven, but somewhere where the cool people live.

These are songs that will never make the mainstream charts - and that's a good thing because when the CrowSoul comes down, Clatch and his followers, and all who are like him will be the ones left behind to spread the word of great music born in dark places of the imagination, and performed from the heart.

That is very brave. But not stupid. Not stupid at all. 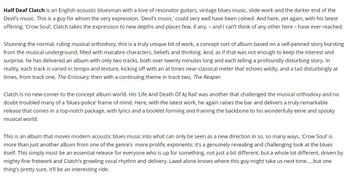 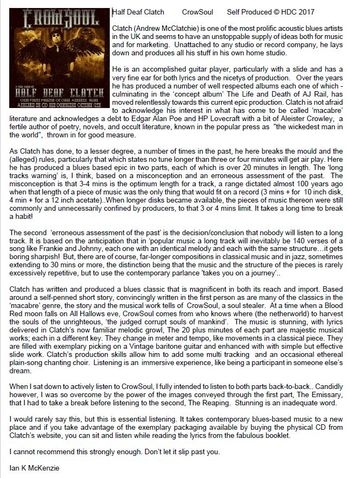 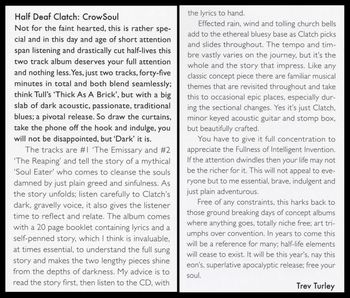